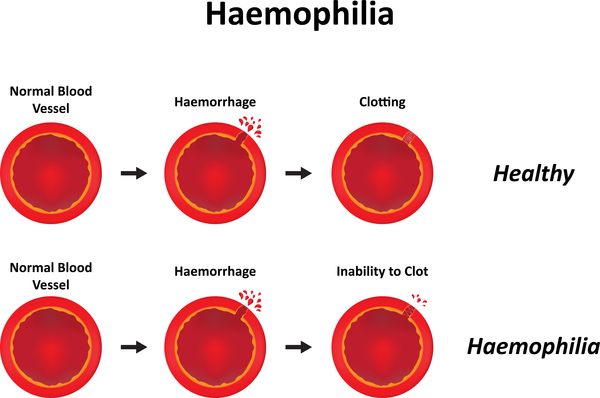 Hemophilia is a rare disorder in which your blood doesn’t clot normally because it lacks sufficient blood-clotting proteins (clotting factors). If you have hemophilia, you may bleed for a longer time after an injury than you would if your blood clotted normally. Small cuts usually aren’t much of a problem.

Hemophilia is caused by a mutation or change, in one of the genes, that provides instructions for making the clotting factor proteins needed to form a blood clot. This change or mutation can prevent the clotting protein from working properly or to be missing altogether. These genes are located on the X chromosome.

The three main forms of hemophilia include the following:

CAN HEMOPHILIA BE CURE

There is currently no cure for hemophilia. Effective treatments do exist, but they are expensive and involve lifelong injections several times per week to prevent bleeding.

FOOD TO AVOID IF YOU HAVE HEMOPHILIA

Food and supplements to avoid

WHY HEMOPHILIA IS RARE IN FEMALE

Hemophilia is a rare blood disease that usually occurs in males. In fact, it’s extremely rare for women to be born with the condition because of the way it’s passed down genetically. A female would need to inherit two copies of the faulty gene — one from each parent — to develop hemophilia A, B or C.

Spontaneous bleeding can cause the following:

Medilane – SAFE WAYS TO VISIT A HOSPITAL IN A PANDEMIC

Risk for severe illness with COVID-19 increases with age, with older adults at highest risk.

×
Open chat on New tab
Need Help?
What are the service Medilane is providing?
Powered by